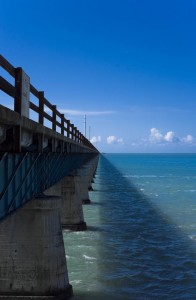 There was a time not long ago where the only access to the Florida Keys was by water. Today, one of the modern marvels of the U.S. and for many, what should be considered the 8th wonder, Seven Mile Bridge made life more convenient and the Keys accessible for everyone. A part of history today, the bridge is located in Monroe County and connects the city to Knights Key and Little Duck Key in the lower Keys. At one point, this bridge which is almost 7 miles long, was one of the longest in the world. Despite the fact that it no longer rivals many bridges, when it opened in 1982, it was amazing. Today, it is still considered one of the most famous and important to residents and visitors alike. Part of the Overseas Highway, there are actually two bridges located in this location, the original constructed in the early 1900’s under the direct supervision of Henry Flagler as part of the Overseas Railroad and Seven Mile.

Facts about the bridge

The Florida Keys are more like a little taste of the Caribbean than mainland U.S. A world all their own, the many small and not quite so small islands and cays present stunning scenery, amazing experiences and a multitude of events throughout the year. Known for its fantastic fishing and boating, it is also well known for just relaxing. Whether snorkeling or diving, fishing or strolling, check out the southernmost point in the continental U.S., the Flora Keys and enjoy the history of Seven Mile Bridge on your way.